The Raptor Claws are large, light blue weapons that fit the user's hands like boxing gloves. Likely based on the Velociraptor, they possess three dinosaur-like claws, as well as pink accents and white feathers lining the inside.

The Raptor Claws are weapons the player can use in-game, which can be obtained as loot or through fusion.

Claws that let wielders go all 65 million BC on enemies. They feature strong melee and ranged attacks, although they have a slow charge time. Wounds received from these claws are so brutal, they often refuse to heal.

AR Card of the Raptor Claws. 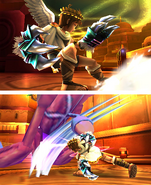 Add a photo to this gallery
Retrieved from "https://kidicarus.fandom.com/wiki/Raptor_Claws?oldid=51224"
Community content is available under CC-BY-SA unless otherwise noted.