The Rare Treasurefish is the golden, glowing variant of the Treasurefish, possessing cream-colored fins and red lips. In addition, its eyes appear to be made of diamonds, and its air sac containing a Treasure Box is purple.

Rare Treasurefish possess no means of attacking their opponents, instead taking to flying through the air aimlessly. They move quicker than regular Treasurefish, and the Treasure Boxes they carry typically yield weapons and powers.

The Rare Treasurefish is loaded with even better cargo than its cousins! You can be sure whatever they're carrying is top notch, so shoot them down on sight. They seem to insist on standing out without any regard for their own safety. 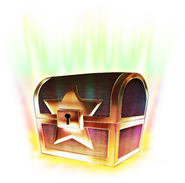 AR Card of the Rare Treasurefish.
Add a photo to this gallery

Retrieved from "https://kidicarus.fandom.com/wiki/Rare_Treasurefish?oldid=46581"
Community content is available under CC-BY-SA unless otherwise noted.