In the original Kid Icarus and Of Myths and Monsters, the Reaper is an animate skeleton with a purple cloak and a matching scythe. Its eyes are typically closed when patrolling, but once it notices Pit they open, revealing pink eyes with purple pupils.

In Uprising, the Reaper now wears a dark blue and white robe with a faded red collar. Its scythe now has a more jagged handle, while the blade has a red, blood splatter-like design on it. In addition, it possesses blank yellow eyes, and red, hair-like tendrils on its head. Once it notices Pit, the tendrils on its head spread out and stiffen, and its yellow eyes begin to bulge.

Reapers appear in every non-fortress area, with the exception of the Palace in the Sky. They prowl along a flat path, turning around when the path ends. However, once every few moments, they will suddenly glance back in an attempt to catch Pit off guard. They turn if attacked from behind in the original Kid Icarus, though this is no longer the case in the 3D Classics version of the game.

Reapers typically can not see too far ahead of themselves, and obstacles block their line of sight as they can only see in a straight line. Should a Reaper notice Pit, it will immediately begin to screech and summon four Reapettes. It will continuously summon groups of Reapettes until it's destroyed, Pit is killed, or Pit moves out of its sight, though any remaining Reapettes will continue to chase him until they are destroyed.

Known as the Grim Reaper, it behaves similarly to how it did in the original Kid Icarus.

Similar to the original Kid Icarus, Reapers react in panic when Pit enters their red line of sight (referred to as "Reaper Eyes"). When this occurs, Reapers summon a group of two Reapettes, which will home in on the angel and ram into him. In addition, Reapers rush towards Pit and slash at him with their scythes.

In the 3DS version of the game, Reapers appear as enemies in the multiplayer feature Smash Run. Defeating them grants the player power-ups.

In the Wii U version of the game, the Reaper appears as a random event in the multiplayer feature Smash Tour. Once it appears, players can exchange three of their fighters for a Checkpoint Bonus.

The Reaper, alongside the Reapette, appears as a collectable spirit in the game's aptly named Spirits mode.

Reapers serve as lookouts for the Underworld Army. When they spot an enemy, they let out a piercing scream that summons their feisty servants, the Reapettes. They also use their giant scythes to reap the souls of their victims. 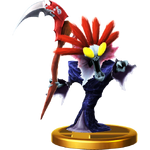 Since he's clearly not planning on doing any gardening, watch out for that scythe! You can tell when one of these has its sights set on you because the music will change and you'll hear a loud scream as it summons its Reapettes. If you always keep your distance and attack from afar, there's no need to fear the Reapers.

The Reaper as it appears in the original Kid Icarus. 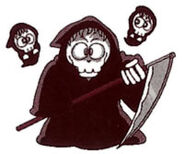 The Grim Reaper as it appears in Of Myths and Monsters.

AR Card of the Reaper. 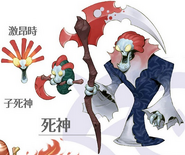 Concept art of the Reaper from Uprising.
Add a photo to this gallery

Retrieved from "https://kidicarus.fandom.com/wiki/Reaper?oldid=50018"
Community content is available under CC-BY-SA unless otherwise noted.