In the original Kid Icarus and Of Myths and Monsters, the Reapette is a small, wisp-like skeleton with a purple cloak and a matching scythe.

In Uprising, the Reapette now wears a green cloak and possesses blank yellow eyes. Its scythe now has a more jagged handle, and its blade appears red, which matches the three tendrils on its head.

If a Reaper notices Pit, it will summon a group of four Reapettes. They will swoop in from off-screen and attempt to ram into the angel.

Reapettes behave similarly to how they did in the original Kid Icarus.

Similar to the original Kid Icarus, they will be summoned by a Reaper should one notice Pit. However, Reapettes now appear in groups of two, and hitting opponents may inflict paralysis.

The Reapette, alongside the Reaper, appears as a collectable spirit in the game's aptly named Spirits mode.

The Reapette as it appears in the original Kid Icarus. 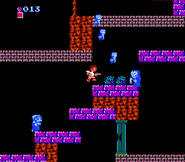 A Reaper summoning Reapettes.
Add a photo to this gallery

Retrieved from "https://kidicarus.fandom.com/wiki/Reapette?oldid=49550"
Community content is available under CC-BY-SA unless otherwise noted.