The Shootfly is a small, purple monster with large ears which it uses to fly. The inside of its ears are yellow, while the majority of the outside is pink.

When inactive, its three eyes remain a light blue color and its large ears fold over itself, covering its face. When activated, its eyes turn red and its ears spread out.

The Shootfly will remain completely dormant should its opponent only use melee attacks around it. However, it will activate upon detecting ranged attacks within its vicinity, causing it to swarm its opponent until they stop firing.

Underworld enemies that function like homing mines. When shots pass them, they locate and then swarm their target. However, they can be passed quietly and only react to ranged shots, so melee attacks are the way to go.

AR Card of the Shootfly. 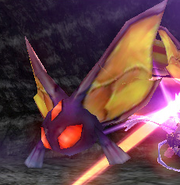