The Silver Bow is a weapon made up of two silver blades, allowing it to be used as both a bow and a pair of swords. Its blades contain blue accents, and it possesses a dark brown handle.

While its arrows are light green in Uprising, they now appear purple in Super Smash Bros. for 3DS/Wii U.

The Silver Bow is a weapon the player can use in-game, which can be obtained as loot or through fusion.

In addition, it is the signature weapon of Dark Pit, who is seen wielding it in chapters 6, 13, and 21.

Appearing as Dark Pit's Neutral Special, the Silver Bow serves as a basic projectile attack. Unlike Pit's Palutena Bow, its arrows can barely curve—however, they are slightly more powerful.

Prototype of a bow designed by Palutena, it's the only weapon of its type whose shot power is higher at close range. Also features a relatively high firing range and homing ability, making it a solid choice for skilled users.

AR Card of the Silver Bow. 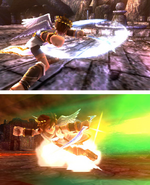 Retrieved from "https://kidicarus.fandom.com/wiki/Silver_Bow?oldid=50949"
Community content is available under CC-BY-SA unless otherwise noted.