The Skull Wing is the second of the three fortress guardians in Kid Icarus: Of Myths and Monsters.

As its name implies, the Skull Wing is comprised of a simple, humanoid skull, a pair of bat wings, and a forked tail.

Having been entrusted one of the Three Sacred Treasures by Palutena, the Skull Wing appears as the second boss of the game.

Its main strategy is to ram into its foe by flying around the chamber in a clockwise pattern, though it often makes slight deviations from its flight path. Should Pit pass underneath it, the Skull Wing may drop a fireball that will grow into three pillars of fire on the ground.

Once its health is reduced halfway, the Skull Wing's speed will increase, along with the likelihood of launching fireballs.

The boss room (As seen in the picture below) is comprised of a flattened floor, with 5 raised platforms for Pit to traverse. It is best to stand directly in the center of the middle platform, as there you can see exactly where Skull Wing can deviate from his pattern. The positions are, in a Clockwise Order,

Directly Above (12 O Clock), moving straight down. This is, oftentimes, the most common time he will drop a fireball. Once finished, he will start moving to the LEFT

Top-Right (1:30), moving in a dive-bomb pattern to Bottom-Left, where he will move upward

Bottom-Right (4:30), performing the same dive-bomb pattern while moving upward. After he reaches Top-Left, he will move to the LEFT

Directly Below (6 O Clock), moving straight up. This is usually much easier to dodge than 12 O Clock. Once he reaches 12:00, he will start moving to the RIGHT

It is important to know that all dive-bomb attacks seem to give him a boost in speed until he returns to his clockwise motion, and that he will often repeat the same movement he did last time at least once before doing something else. It is also of use to note that the bottom corners of the room are immune from Skull Wing's hitbox if the player crouches. Note that this does not save you from being hit by the flame pillars.

On the subject of the Flame Pillars, Skull Wing can drop up to three flame Pillars at a time, causing a hefty amount of Sprite Flicker. This will end up making it difficult to see where the boss is, and therefore you can get hit for seemingly no reason. 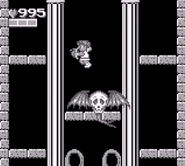 Retrieved from "https://kidicarus.fandom.com/wiki/Skull_Wing?oldid=48942"
Community content is available under CC-BY-SA unless otherwise noted.