The Skyscraper Club is a large weapon that resembles a skyscraper building in modern society. As such, it features clusters of angular structures, yellow squares resembling lit up windows, rainbow stripes similar to that of a flashy casino, and shining lights at its tip.

The Skyscraper Club is a weapon the player can use in-game, which can be obtained as loot, through fusion, or by completing a challenge in Hades's Treasure Hunt that requires the player to clear Chapter 19 within 17 minutes.

A club with a rather modern look. Its charged shots deal massive damage up close and decrease in power the farther they travel. The Skyscraper Club decreases the user's speed more than most clubs.

AR Card of the Skyscraper Club. 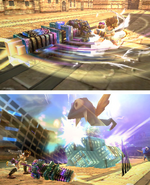 Retrieved from "https://kidicarus.fandom.com/wiki/Skyscraper_Club?oldid=51244"
Community content is available under CC-BY-SA unless otherwise noted.