Divinipedia
Register
Don't have an account?
Sign In
Advertisement
in: Kid Icarus, Kid Icarus enemies, Kid Icarus: Of Myths and Monsters,
and 5 more

Snowmen (スノーマン Sunōman) are Underworld enemies that debuted in the original Kid Icarus.

In the original Kid Icarus, the Snowman appears as a tall, humanoid creature made of ice blocks akin to an igloo. It has pink eyes, a large nose, and a wide mouth.

In Of Myths and Monsters, it appears as a short, round creature with stocky limbs and a frowning face.

In Uprising, the Snowman reverts to its appearance from the original Kid Icarus with some minor differences—its eyes are now orange with purple lining them, and the purple interior of its torso becomes exposed when it attacks.

Found in the Overworld stage, Snowmen will trudge along and throw snowball projectiles at nearby opponents. This is their only means of attacking other than damaging foes on contact.

Known as Gruffs, they behave similarly to how they did in the original Kid Icarus.

Appearing exclusively in Land Battles, the Snowman slowly prowls the battlefield, inflicting damage on anyone it stomps into. Every few moments, it will ready itself by exposing its purple innards, then release a cold wind that can potentially freeze its opponents. Its weak point is its face.

A Snowman appears in the episode "Mr. & Mrs. Mother Brain," where it throws an ice shard at Kid Icarus but misses, to which Kid Icarus destroys it shortly after.

A mean, hulking giant made of ice, this is one Snowman who definitely isn't a jolly, happy soul. A territorial beast, it blasts all who come near with its frozen breath.

The Snowman as it appears in the original Kid Icarus.

The Gruff as it appears in Of Myths and Monsters.

AR Card of the Snowman. 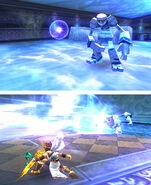