As the name implies, the Space Pirate Ship is a ship used by Space Pirates in Kid Icarus: Uprising. The land battle for Chapter 8 takes place inside the ship, and so does the boss battle with the Space Kraken. The pirates use this ship to sail the Galactic Sea and rob the heavens of constellations. The ship uses a core of galactic particles to sail the seas, and can run indefinitely as long as the ship remains in the Galactic Sea. Pit ventures into this ship in order to get back his Three Sacred Treasures. When he meets the Space-Pirate Captain atop the deck, the captain is suddenly eaten by the Kraken. Pit then battles the Kraken and gets the treasures back after defeating him. 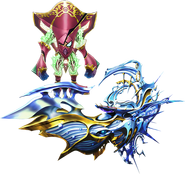 Add a photo to this gallery
Retrieved from "https://kidicarus.fandom.com/wiki/Space_Pirate_Ship?oldid=48887"
Community content is available under CC-BY-SA unless otherwise noted.