In the original Kid Icarus, the Specknose appears as a pink, nose-shaped monster with orange eyes that resemble glasses, and thin tendrils hanging from its underside.

In Uprising, it now has purple pupils with blue eyelids, and glasses frames that are now green and yellow. It has yellow bumps that resemble blemishes on the tip of its nose, and blue and purple appendages hanging from its underside.

Specknoses only appear once an opponent enters their lair, to which they fly across the screen and swarm the intruder.

Unlike the original Kid Icarus, the Specknose no longer attacks by swarming its enemies.

From afar, the Specknose will launch powerful bombs from its nostrils that bounce toward its opponents and detonate on contact or after a few seconds.

At close range, it will not only use the former attack, but also sneeze at its foes, which causes significant knockback.

Additionally, a Specknose is required to form a Monomiknose, along with two Monoeyes and a Mik.

The Specknose appears as a collectable spirit in the game's aptly named Spirits mode.

Specknose prefers damp climates and, while cowardly by nature, isn't afraid to launch sneeze bombs at the first sight of prey. Its mustache-like growth is actually a set of tentacles. Gross, right?

Let's get one thing straight here—those are tentacles, not hair, hanging under that oversized nose. Specknoses may look goofy, but you should be wary of the dangerous projectiles they can shoot from their nostrils. Ew! I hope those are just regular bombs... 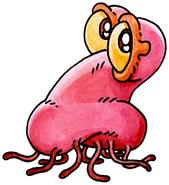 The Specknose as it appears in the original Kid Icarus.

AR Card of the Specknose. 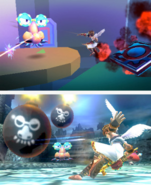