The Stealth Claws are slim weapons that fit the user's hands like boxing gloves. Likely based on the Invisible Man, its base is comprised of white wrappings with a pair of sunglasses attached, and three long, transparent claws protruding out from it.

The Stealth Claws are weapons the player can use in-game, which can be obtained as loot, through fusion, or by completing a challenge in Palutena's Treasure Hunt that requires the player to clear Chapter 7 using claws on Intensity 5.0 or higher.

Forged in darkness and wrapped in the bandages of mummies, these claws are nearly invisible, so the targets of its fast fire may find it hard to find out exactly who is shooting. The claws do have a lower melee power, however.

AR Card of the Stealth Claws. 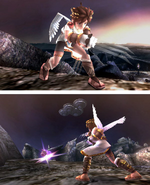 Retrieved from "https://kidicarus.fandom.com/wiki/Stealth_Claws?oldid=48787"
Community content is available under CC-BY-SA unless otherwise noted.