Pit returns as a veteran from Super Smash Bros. Brawl, and Palutena and Dark Pit join as newcomers.

Palutena's Temple. One of the largest stages of the game, it is exclusive to the Wii U version.

Skyworld. A returning stage from Brawl, it is exclusive to the Wii U version.

Reset Bomb Forest. A small, transforming stage based on Chapter 11 of Uprising, it is exclusive to the 3DS version.

Super Smash Bros. for 3DS/Wii U features a total of 15 Kid Icarus music tracks between both versions of the game, four of which were carried over from Brawl. Most of the new songs were taken directly from Kid Icarus: Uprising, while "In the Space-Pirate Ship," "Wrath of the Reset Bomb," "Lightning Chariot Base," and "Destroyed Skyworld" were remixed.

These songs appear as background music for the Palutena's Temple, Skyworld, and Reset Bomb Forest stages, as well as in Smash Run. They can also be listened to by selecting them on the Sound Test section of the main menu.

Palutena's Guidance is a hidden feature exclusive to the Wii U version of the game, accessible only by tapping Pit's down taunt briefly on the Palutena's Temple stage.

Upon activation, Pit, Palutena, and Viridi will begin discussing strategies for one of the opponents that Pit is currently facing.

Super Smash Bros. for 3DS/Wii U features collectible trophies from various series, including Kid Icarus. While both versions share a small handful of trophies between each other, the majority of the Kid Icarus trophies are exclusive to the 3DS version of the game.

Smash Run is a multiplayer feature exclusive to the Nintendo 3DS version of the game. Over the span of five minutes, the player must explore a massive labyrinth in search of power-ups, fighting enemies along the way. Once time is up, all players battle against each other using the power-ups they found during their adventure.

Smash Tour is a multiplayer feature exclusive to the Wii U version of the game. Ranging from 15 to 25 turns, it takes place on a board game-style map, where players must spin for a random number and move however many spaces the spinner allows them. The goal is to collect as many fighters and stat boosts as possible before the final battle, where all players must fight each other until they run out of lives or time.

Cover art of the Wii U version.

Cover art of the 3DS version.

Logo for the Wii U version.

Logo for the 3DS version. 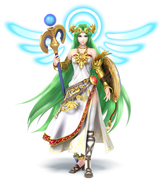 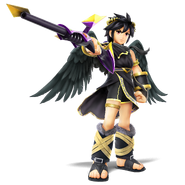 Official render of Dark Pit.
Add a photo to this gallery

Retrieved from "https://kidicarus.fandom.com/wiki/Super_Smash_Bros._for_Nintendo_3DS/Wii_U?oldid=49939"
Community content is available under CC-BY-SA unless otherwise noted.