When inactive, it appears to be a blue, floating ball with a bright orange core and a rocky surface.

When active, it breaks apart into three pink, apostrophe-shaped pieces, which possess one yellow eye each.

The Trynamite's only strategy for attack is breaking apart into three pieces before homing in on its target. This process will trigger regardless of whether or not it is approached or left alone.

Exploding mines of the Forces of Nature. They explode with a loud bang, sending three chunks of shrapnel flying toward foes. Viridi sometimes gets playful when naming her troop, hence the pun here on "dynamite." 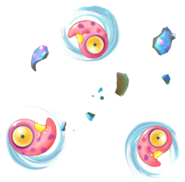 Alternate art of the Trynamite.

AR Card of the Trynamite.