The Upperdash Arm is a golden, gauntlet-like weapon equipped with a red, disc-shaped device. While the gold parts have red accents, the red disc possesses black decal that surrounds a blue orb in the center.

The Upperdash Arm is a weapon the player can use in-game, which can be obtained as loot, through fusion, or by completing a challenge in Hades's Treasure Hunt that requires the player to clear Chapter 17 within 18 minutes on Intensity 7.5 or higher.

The Upperdash Arm is outfitted with a disc-shaped device that fires ring shots. Its backward-dash charged shot can lift foes into the air. While its regular melee attacks are weak, its melee dash attack deals massive damage.

Arms are a family of weapons that attach to the user's arm and fire projectiles. This one is outfitted with a disc-shaped device that fires ring shots. As the name implies, its real specialty lies in its powerful melee dash attack. Remember to take it off before a meal, though.

AR Card of the Upperdash Arm. 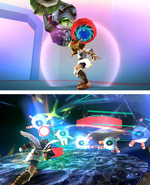 Add a photo to this gallery
Retrieved from "https://kidicarus.fandom.com/wiki/Upperdash_Arm?oldid=51140"
Community content is available under CC-BY-SA unless otherwise noted.