Viridi (自然王ナチュレ Shizen-ō Nachure, "Nature Monarch Nachure") is the Goddess of Nature and leader of the Forces of Nature. Her goal to wipe out humanity initially puts her at odds with Palutena, though they eventually put aside their differences and work together to face other common threats.

She is voiced by Hynden Walch in the English version of Kid Icarus: Uprising and Super Smash Bros. for Wii U, by Dayci Brookshire in Super Smash Bros. Ultimate, and by Makiko Ohmoto in the Japanese versions of said games.

Viridi is a young-looking goddess, standing at about 4'7" (139 cm[1]) and resembling an 8-year-old human girl[2] with hazel eyes. She wears a shin-length dress colored in purple, red and pink, and decorated with numerous vines. She also wields a large, wooden staff. Her long blonde hair is also tied up in an off-centered ponytail using vines.

Despite her initially destructive nature, Viridi is not necessarily evil; rather, she desires revenge on the human race for taking advantage of nature. As a result of Pit getting in the way of her plans, she often argues with him in a childish manner while sending her Forces of Nature to attack him.

However, during the Aurum invasion, she begins to have a change of heart, and remains an ally for the rest of the game. Though she claims that she is only helping Pit because it is in her best interest, it is implied in Chapter 16 that she may secretly have a soft spot for the angel.

Viridi deems humans unworthy to exist because they are cruel toward nature, so she sends out a Reset Bomb to wipe out two warring factions that are fighting over a false Wish Seed. As a result of their wars, Viridi wants to target the rest of the human race, thus becoming Pit's enemy as she sends Cragalanche on him when he and Palutena interfere. Later, as the bulk of her army battle Hades's army, Viridi commands her remaining forces to stop Pit from destroying her Reset Bomb Depot. Pit then makes quick work of the Reset Bomb Pod and the guards, causing the Depot to explode and fall apart. A furious Viridi then tells Pit that he's now officially at the top of her "to-kill list."

During the beginning of the Aurum invasion in Mysterious Invaders, Viridi is forced to form a temporary alliance with Palutena and Hades in order to defeat the extraterrestrial beings. Throughout the Aurum arc of the story, Viridi notably begins to soften up, especially towards Pit. In The Aurum Brain after Pyrrhon merges with the Aurum Brain, she attempts to take him down by using her final Reset Bomb, but unfortunately, this has very little effect and the bomb quickly disintegrates. Viridi helps Pit again after his Power of Flight runs out by sending a platform carried by her troops to guide the angel to the sun god. However, Pyrrhon manages to destroy all the Nutskis carrying the platform later on. As Pit battles Aurum Pyrrhon, Viridi comments on how the Aurum are like most living creatures as they too are concerned for their survival, but unlike most living things, the Aurum are too unnatural and destructive. After Pyrrhon is defeated and sends the Aurum Brain to the other end of the galaxy, the nature goddess states that he "finally does something useful."

Viridi also aids Pit in freeing Palutena from the Chaos Kin's control and allowing him to rest at her sanctuary. As Dark Pit makes it through the City of Souls, she learns of Hades's whereabouts and his plan to use "tons of souls" to create monsters on catastrophic scales. As Viridi compares Hades's goal with humans disrupting balance on Earth, Dark Pit reminds her that all gods with their wars are throwing everything off balance. She doesn't accept the truth but Palutena makes things clear that gods and humans are all responsible and only Hades is profiting from their struggles. After Dark Pit restores Pit's wings at the Rewind Spring, she saves the former from falling after Palutena points out that he can't fly anymore, having lost Pandora's powers.

She observes the final battle between Hades and Pit, rooting for him and enabling his Power of Flight after the Great Sacred Treasure was shattered. Once Hades is defeated and no longer poses a threat, she reintroduces the issue she has with the humans, but is forced to drop the subject and let Pit have his happy ending.

In the 3DS version of the game, Viridi appears in the background of the Reset Bomb Forest stage.

In the Wii U version of the game, Viridi makes several appearances in Palutena's Guidance, making comments on different fighters alongside Palutena and Pit.

She is also available as a Mii Swordfighter costume for both versions of the game.

Viridi not only reprises her roles in the Reset Bomb Forest stage, Palutena's Guidance and Mii Swordfighter costume, but she also appears as a collectable spirit in the game's aptly named Spirits mode.

The goddess of nature. Viridi wants to exterminate the humans on the surface world, believing they have corrupted the natural order. Yet she also opposes the destruction and blind harvesting of souls committed by the Underworld Army.

The goddess of nature, she believes it is her duty to return heaven and earth to their pure states, and so she labels humans as contaminants of nature that should be eliminated. She butts heads with human-protecting Palutena but hates soul-stealing Hades even more. 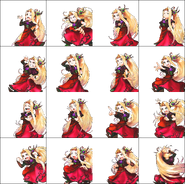 Official artwork of Viridi and Pit. 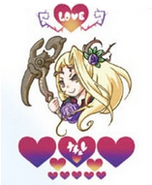 Her art from the Viridi Palm.

Viridi's projection during the Air Battle in Chapter 11.

Viridi's appearance at the end of Chapter 11.

Viridi as she appears in Super Smash Bros for 3DS.

The Viridi costume in Super Smash Bros for Wii U.