When inactive, the Zert is a monster resembling a dead tree, possessing roots beneath its body and purple branches. In addition, it has two yellow eyes, and a storm cloud atop its head.

When active, its body splits open, revealing a staff-like object in the center containing a crystal.

In Air Battles, Zerts cast out horizontal bars of electricity at their foes.

In Land Battles, they spawn electrical spheres around themselves, as well as ram into opponents. Both of these attacks have a chance of inflicting paralysis.

After being struck by lightning, this tree gained the power to produce small storm clouds. Zert paralyzes its victims and blasts them with lightning damage. It moves erratically because of the electricity that courses through it.

AR Card of the Zert. 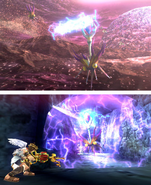 Retrieved from "https://kidicarus.fandom.com/wiki/Zert?oldid=46598"
Community content is available under CC-BY-SA unless otherwise noted.