Zeus, formerly known as a friendly god (神様 Kami-sama, "God"), is a character that debuted in the original Kid Icarus.

In the original Kid Icarus, the friendly god appears as a balding man with a mustache and beard, adorning simple robes.

In Of Myths and Monsters, Zeus appears similar to his former appearance, only now he lacks his beard and possesses a halo and wings.

Known simply as "a friendly god," he resides within Sacred Chambers to grant Pit an arrow to increase his strength. He can also be found in Sacred Training Chambers, where he puts Pit through harsh training to deem him worthy of the Sacred Bow, Fire Arrow, or Protective Crystal.

Known as Zeus, he behaves the same way as he did in the previous game, only now he is also responsible for granting Pit more life blocks depending on his score. 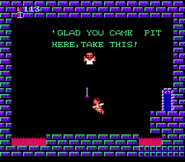 A friendly god in the original Kid Icarus. 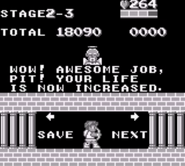 Zeus as he appears in Of Myths and Monsters.
Add a photo to this gallery

Retrieved from "https://kidicarus.fandom.com/wiki/Zeus?oldid=48840"
Community content is available under CC-BY-SA unless otherwise noted.