In the original Kid Icarus, the Zuree is a ghostly figure wearing a light blue cloak, with two blue eyes and a large pink nose.

In Uprising, it now wears a tattered, white cloak with blue trimming. When active, it has fiery orange eyes, a pink face, and a gaping mouth with sharp teeth and a long tongue. It possesses two skeletal arms, and massive claws with red tips.

When inactive, the Zuree appears as a blue mist. In between performing attacks, its face becomes obscured by the hood of its cloak, and it lacks its claws.

Found in the Palace in the Sky, the Zuree flies up and down vertically, attempting to ram into its opponents.

The Zuree lies in wait as it disguises itself as a cloud of blue mist, which is invulnerable to all attacks. It reveals itself right before slashing at its opponents, which inflicts its foes with shaking.

Zurees appear as enemies in the multiplayer feature Smash Run. Defeating them grants the player power-ups.

The Zuree usually live in the Underworld, but in Kid Icarus, Medusa set them to work guarding the Palace in the Sky. In Smash Bros., they appear as a silvery mist, waiting until they've floated close enough to a fighter before showing themselves and attacking with their sharp claws. That's your cue to fight back!

Attacks pass through this Underworld ghost when in spirit form, allowing it to approach prey and rip it to shreds with its deadly shake-inducing claws. This leaves it vulnerable, so dodge with a dash and then strike! 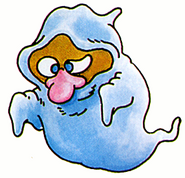 The Zuree as it appears in the original Kid Icarus.

AR Card of the Zuree.