The Zurret is a white monster with large appendages on either side of its head and a single, bloodshot eye. It has rows of bumps lining its appendages, as well as what appears to be semi-transparent skin near its center. Its body splits off into three sections near its pot, which resembles the formation of DNA. The green pot it typically resides in has a hole in the back and a hole in the front, allowing a third appendage to poke through the front.

The Zurret resides inside its pot until it senses a nearby foe, to which it appears.

At close range, it will shoot three or four lasers at its opponents, which are fired at the same time but branch off in different directions. From afar, the Zurret will not only use the former attack, but it will also fire three spiraling projectiles at its foes as well.

A Zurret is effectively an Underworld fixed gun turret. Zurret larvae mature within days of being placed in soil. After growing, it hides until prey approaches, at which point it pops up and shoots a deadly accurate blast.

AR Card of the Zurret. 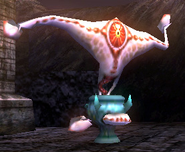